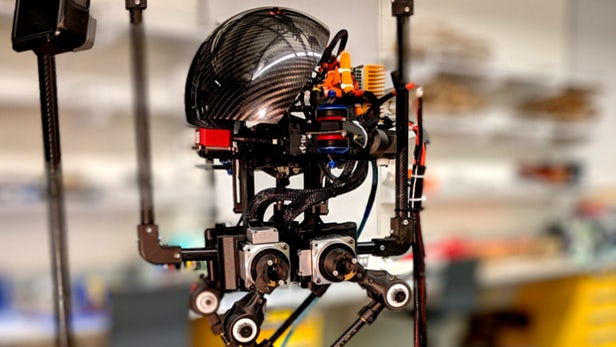 Traditionally, robots are either airborne or landlubbers – there’s not much crossover. But researchers at Northeastern University have now built a robot that can do both, walking around on two legs before jumping and flying short distances to get over obstacles in its path.

The first clue to how nimble the robot is may just be its name. The Northwestern team calls the little guy “LEONARDO,” in one of the biggest stretches ever made for an acronym – apparently it stands for LEg ON Aerial Robotic DrOne.

Standing about 2.5 ft (0.8 m) tall, Leo has a “chicken walker” stance, with a body perched atop two spindly legs. To give him a good balance of strength and lightness, Leo is made mostly of carbon fiber and apparently weighs just 6 lb (2.7 kg).

But that’s just one half of the equation – Leo also has a pair of thrusters on his sides that are strong enough to let him fly. He won’t exactly be as maneuverable in the air as a regular old drone, but that’s not really the goal. Instead, Leo’s thrusters are designed to give him more air-time after a jump, allowing him to leap over obstacles and land safely on the other side.

“The idea is not to create a quadcopter,” explains Alireza Ramezani, lead researcher on the project. “The idea is to have a machine that can leverage its legs and the thrusters to, for example, enhance its jumping capability.”

Those thrusters can also help the robot keep its balance. Although it seems effortless to us humans, keeping a bipedal robot from faceplanting on uneven terrain or just a light breeze is harder than you might think. After all, just five years ago Boston Dynamics’ creepy ATLAS robots were stumbling around like drunks – now they’re running through the woods, performing parkour and even landing backflips like pros. Leo could show similar stability, firing up the thruster on one side if he starts to tilt that way.

Leo isn’t necessarily the first robot that can both walk and fly – a few years ago an EPFL team built a bat-like bot that could also move on land. But that one was predominantly a drone that could crawl, making it almost the exact opposite of Leo as it was more at home in the air than on the ground.

Although it’s still early days for Leonardo, the researchers say robots like him could one day be used for exploration, including on other planets.

“At this stage, I look at this as a very good platform to push agile robotics,” says Ramezani. “Think of a robot that literally never falls: It can negotiate rough terrain, it can fly, it can jump. An ultra-capable system. Down the road, we can use a machine like this for exploration.” 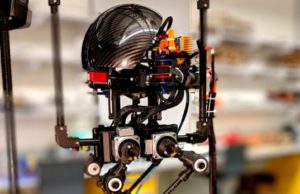 News
Traditionally, robots are either airborne or landlubbers – there's not much crossover. But researchers at Northeastern University have...