Randy bot-bonkers flog their second-hand dolls to each other – sometimes for thousands of pounds apiece.

The Doll Forum is the go-to destination for owners of so-called “sex dolls”, acting as a safe haven for chat about the best models and sharing explicit photos and videos.

But it’s also turned into a digital swap-shop for buyers on a budget.

However, horned-up Doll Forum users can pick up “used” models for just a few hundred pounds.

One user posted that he was trying to sell a 156cm doll for $250, and cited the condition as “poor”.

The owner listed the item as “used”, and said: “She is a mess of damages, which is why she is cheap.”

And one buyer created a post titled: “Give me your bruised, battered, tired dolls.”

They wrote: “I’m looking for broken tired dolls that night be headed for the dumpster.

“I’ll give them refuge and try to heal them. I’ll play shipping plus a little. Whatcha got?”

An American user trying to sell a 158cm doll (just over five foot tall) asked for $600 for his “beautiful” doll.

“Really pretty doll, bought as my first approximately a month-and-a-half ago,” he wrote.

“I decided I wanted another doll that was lighter skinned with B cups after I had already ordered this one. That is the only reason I’m selling this doll.

“Limbs are stiff and pose well. Doll is cleaned and sanitised both in and outside.

“Black dress/thong and white teddy included. Treat yourself to this smoking hottie before somebody else does.”

Often the dolls for sale include previously-used fake genitals, which have already been humped by their owners.

Sellers generally say they’ve cleaned their saucy doll parts – but there’s no way for buyers to know how thoroughly.Play VideoSex robots will soon feel love and suffer devastating pain after we dump them, expert reveals

It’s not just sex dolls that are for sale, either.

One enterprising user is flogging an “80cm elf doll mould” for $200.

A buyer will be able to pour their own sex doll using silicone – effectively giving them the opportunity to create unlimited love-bots in their own home.

Sex robots are fast becoming a major sex industry trend, and the Doll Forum is evidence of that.

“Guys are getting exactly what they have always wanted, but the problem is, the costs for high quality dolls are beyond many men’s budgets.

“So forums like that allow men to share them, which is a pretty reasonable response to the high costs.”

According to Brian, silicone dolls are fairly safe because they “can be fully disinfected” – but they also cost a pretty penny.

“If guys are sharing the cheaper TPR dolls (rubber ones), I think UTIs are coming soon,” he told The Sun.

But even with the risk of contracting a dodgy disease from a fellow member, the Doll Forum proves extremely popular.

The website, which describes itself as “the world’s definitive resource on love dolls”, has more than 60,000 members, and boasts upwards of 1.4million posts. 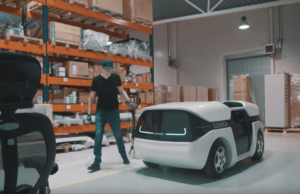 News
The self-driving robot courier will automate the last mile delivery and parcel handover from a courier to a client.