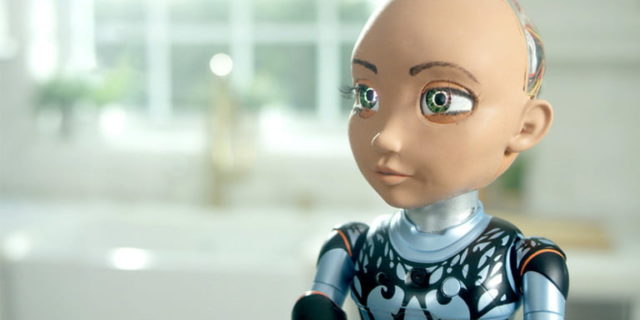 Little Sophia is the little sister of Sophia and the newest member of the Hanson Robotics family. She is 14” tall, and your robot friend that makes STEM, coding and AI a fun and rewarding adventure for kids 7-13 years old, especially girls.

Little Sophia can walk, talk, sing, play games and, like her big sister, tell jokes. With Little Sophia’s software, and included tutorials through Hanson’s AI Academy, she is a unique programmable, educational companion for kids, inspiring children to learn through a safe, interactive, human-robot experience. Kids, educators and even Sophia the Robot fans, regardless of age, will find Little Sophia irresistible!

The team behind Little Sophia is comprised of a diverse and renowned global group of engineers, scientists, roboticists, toy makers, character developers, designers and AI experts, many of whom helped build Sophia the Robot.

One of our goals at Hanson Robotics is to support and encourage the future scientists, developers, engineers and roboticists that will shape our world tomorrow.  Research has shown that science achievement gaps emerge by kindergarten and these gaps continue until at least the end of eighth grade.

The growth of STEM jobs in the future is expected to skyrocket. However, there’s a lack of women in these fields meaning fewer female role models, both for current female STEM employees, and for girls still forming career choices. There’s no evidence that girls are less capable in these fields, but rather that they often ‘feel’ less capable, partly due to stereotyping. Stats vary by country and by discipline, but generally speaking, women make up only 15-25% of the current STEM workforce, and the gap is broadening.

We believe that Little Sophia can help to introduce STEM, coding and AI to children – especially girls – in a fun, safe, inspiring and interactive way that might help to make small difference in reversing the current trends.

Little Sophia delivers a high-quality, entertaining and educational experience so young students are highly motivated to spend time learning with her. The interaction between Little Sophia and users focuses on storytelling and learning new things. She’s not just another robot toy built by a toy company, Little Sophia has been designed and built by the same renowned scientists, roboticists and engineers who built Sophia the Robot.

Little Sophia has the same endearing personality as Sophia the Robot. She is intensely curious, refreshingly innocent, and uniquely playful. She is the only consumer robot with a human-like face who can generate a wide range of human facial expressions. She not only responds to commands, but also actively engages in conversations. This unparalleled responsiveness together with her humanoid design makes Little Sophia a smart, educational companion.